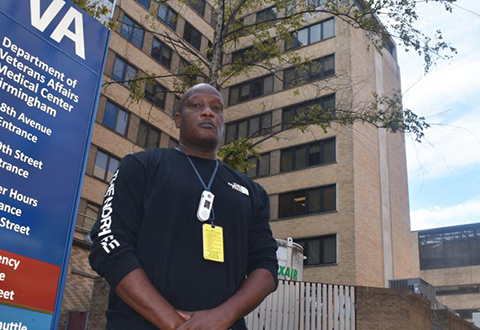 Ryan Davis, a member of Birmingham VA Health Care System (BVAHCS) Patient Escort Services, had just dropped off a Veteran at appointment check-in and was conversing with a medical center police officer when a stranger approached him in distress.

Both followed the gentleman to his vehicle and found a backseat passenger unresponsive. After checking for a pulse, Davis immediately began performing CPR on the Birmingham resident.

Right place at the right time

Davis’ supervisor, Lakiesha Lockhart, BVAHCS Nurse Manager, was notified of him being the first responder of the incident, and possibly saving the life of the patient.

“I was proud when I heard Ryan (Davis) responded to a citizen in distress, but knowing him, his character, and his skill set, I expected nothing less,” said Lockhart. “Ryan is dependable, a hard worker, professional, and goes above and beyond each day he is scheduled to work.”

“When incidents of this nature happen, seconds matter”, said Davis. “When I got word of a patient being in distress, my training kicked in and I responded without hesitation.”

In addition to serving as a patient escort, Davis is a graduate of the University of Alabama at Birmingham Emergency Medical Services and works as a paramedic for Lifecare of Alabama, Inc. Medical Transportation.

“During my career I’ve had my share of first responder incidents,” said Davis. “I try to learn something new from each one, to be a better responder each time duty calls. The ability to provide first aid to a patient in an effective and timely manner can sometimes be the difference between life and death.”

Davis describes himself as positive, resilient, and vigilant. He realizes that while his career is very rewarding, there can be stressors associated with it also. He attributes his positive attitude to his family, co-workers and lifestyle.

“Exercising daily and maintaining a healthy diet helps me keep both my mind and body in optimal shape,” said Davis. “Being both a paramedic and patient escort requires me get plenty of sleep each day, in order to always remain alert when working.”

In addition to a robust work schedule, Davis is a single father to three children, ages 19, 17 and 13.

He lives a life of purpose, but has had setbacks

A little over a year ago, Davis, his wife Temeka, and their three children tested positive for COVID-19. He and Temeka were hospitalized and after spending four days in the hospital, his health began to improve. He made a recovery and was discharged from the hospital.

His wife’s health did not improve and weeks later, it took a turn for the worse. She was placed on a ventilator. Temeka died in August 2020 from COVID-19 complications.

“The most difficult thing I’ve ever had to do in my life was tell my children their mother was not coming home,” said Davis.

Over the coming months, his family experienced many stages of grief, denial, and pain. Their road to emotional recovery was a long one, with some days being better than others. Davis admits that there were moments when he blamed himself and sometimes felt isolated.

He attributes his faith, his children and his friends and co-workers at the VA for getting him through one of the most challenging experiences of his life.

“Never underestimate the power of a kind word,” said Davis. “I can’t thank the members of the BVAHCS staff, especially the nurses in Patient Care Services, for their thoughts, prayers and support. My family and I continue to grow stronger and stronger with each day.”

Davis and his three children have been vaccinated against COVID-19.

“I was so excited when the COVID-19 vaccine became available in December 2020,” he said. “I got very emotional when I took my first shot. After contracting the virus and being hospitalized, I realize the significance of being fully vaccinated.”

Davis’ life experiences have given him a renewed sense of service, and his training allows him to remain in a constant state of readiness.

“After I responded to that patient in distress, I could feel Temeka looking down and patting me on the back,” said Davis. “I am thankful for support I receive from my family, my church, and the VA. All give me the opportunity to make a positive impact on the lives of others.”

The positive attitude Davis emits is welcomed both by BVAHCS Veterans and staff.

“Ryan takes so much pride in what he does,” said Lockhart. “It has been an honor working with him. He is truly an asset to our facility.”