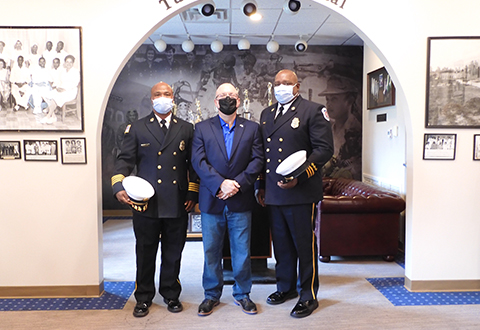 It was a hot and sunny afternoon and Capt. Robert Smith, a firefighter for the Central Alabama Veterans Health Care System, pulled over to the side of the road to safely connect his Bluetooth to his car.

He notices an older gentleman pulling up behind him. It was Navy Veteran Walter J. Simmons who asked him for directions. Smith noticed Simmons was using a printed map, which was unclear, so he wrote some new, more precise directions.

Smith wanted to ensure Simmons didn't get lost so the gentlemen exchanged phone numbers. Then something troubling happened. Smith observed that Simmons did not safely enter the highway. Multiple cars had to swerve to prevent a collision on the busy interstate.

"After my dad proceeds down the interstate, Capt. Smith noticed that my dad's driving would likely result in an accident," said Diane Brown, daughter of Simmons.

Smith sprang into action and motioned for Simmons to pull over.

"I discovered that something just wasn't right at the moment, so I asked him if he was feeling okay," Smith said.

Smith explained to Simmons that he entered traffic dangerously, but Simmons didn't realize what happened. Smith felt positive that Simmons wasn't under the influence of drugs or alcohol and worried for his safety.

Smith asked if he could call someone, which led to him speaking to Simmons's daughter on the phone.

"Captain Smith felt like my father was experiencing some sort of medical problem which was interfering with his ability to drive," Brown said.

After a brief conversation with Brown, Simmons agreed to ride with Smith to visit the Montgomery VA hospital. Brown states Smith's action saved her father's life and perhaps the lives of others after VA discovered some serious medical conditions.

"Captain Smith's observations that day may have saved lives and it may have added some time to my father's life so that appropriate treatments may begin," said Brown.

In a letter addressed to the CAVHCS Fire Chief, Brown explained that first responders often put their lives on the line to help others and she wanted to ensure that Smith's heroic act didn’t go unnoticed.

"I feel great about possibly saving someone's life. I think that's what we are supposed to do as firefighters. We are public servants," Smith said.