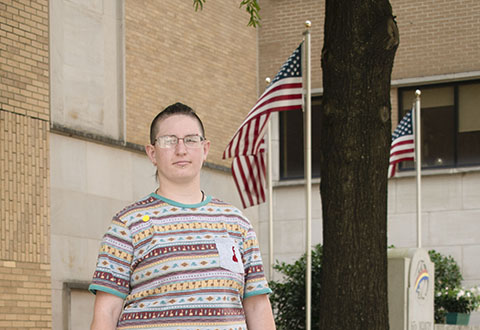 Army Veteran, Alicia Cavaco, enlisted in the military during the time of “Don’t Ask, Don’t Tell”. It wasn’t until after her enlistment that she became a part of the LGBT community.

“With ‘Don’t Ask, Don’t Tell’ still in effect in the military, it was rough because being gay was seen as a bad thing and not an option,” said Cavaco.

The US military ‘Don’t Ask, Don’t Tell’ policy was implemented in 1994 prohibiting homosexuals from disclosing their sexual orientation while serving in the armed forces, or consequently they would be separated from the military. The policy ended in 2011. Since then, the VA implemented the “Do Ask, Do Tell” policy to better assist LGBT Veteran patients.

After her enlistment and coming out into the LGBT community, Cavaco began receiving care at the VA.

“My experience at the Birmingham VA has been overall amazing,” said Cavaco. “The doctors here have been very accepting in ways that I didn’t know was lacking in other facilities.”

Cavaco said the number one thing that the VA has to offer LGBT Veterans is therapy.

“My partner and I get not very nice looks when we go out, and you don’t realize how much that actually affects you,” said Cavaco. “Having someone to talk to about these issues the LGBT community faces, working through them and learning ways to cope is so important, because many of us don’t have support from family or friends.”

As a LGBT Veteran, Cavaco said her needs are being met by the VA.

“If you’re in a smaller area, don’t be afraid to ask for referrals if you don’t think your needs are being met as an LGBT Veteran,” said Cavaco. “The VA has a lot to offer.”