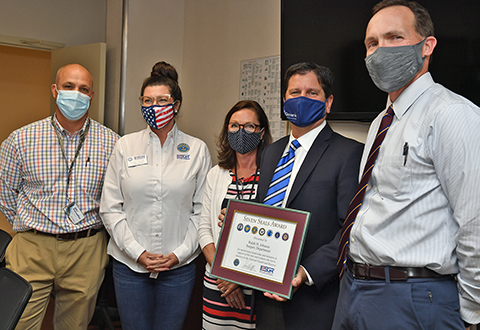 “The Seven Seals Award is a rare and meaningful award given only at the discretion of ESGR Senior Leadership,” said Kristin Smith, ESGR Charleston, South Carolina Area Co-Chair. “The Seven Seals Award is given to those organizations that demonstrate significant, company-wide support of the ESGR mission, which in this case, is the Ralph H. Johnson Surgical Department’s  recent support of the Guard and Reservists while they were deployed on COVID missions.”

“Over the last decade, the department has supported the deployment of a number of military personnel from different branches,” said Trigiani. “Over the years, the surgery department has indirectly supported Operation Enduring Freedom, Operation Spartan Shield, and most recently, military COVID support operations.”

One of the focuses of ESGR, which is at the service of approximately 1.3 million Reservists and Guardsmen, is to recognize employers and supervisors that show demonstrated support for citizen soldiers and their families. The Ralph H. Johnson VA Health Care System is one of the largest employers of Guardsmen and Reservists in the Charleston area.

“When I hear that the VA is being recognized for this, well, we exist for our Veterans,” said Scott Isaacks, Director and CEO of the Ralph H. Johnson VA Health Care System. “We make sure that we can shift things around here so that you can serve and we know there is a lot more that is being shifted in your lives besides just working here. Thank you for the sacrifices that you make.”

For more information about Employer Support of the Guard and Reserve, please click here.